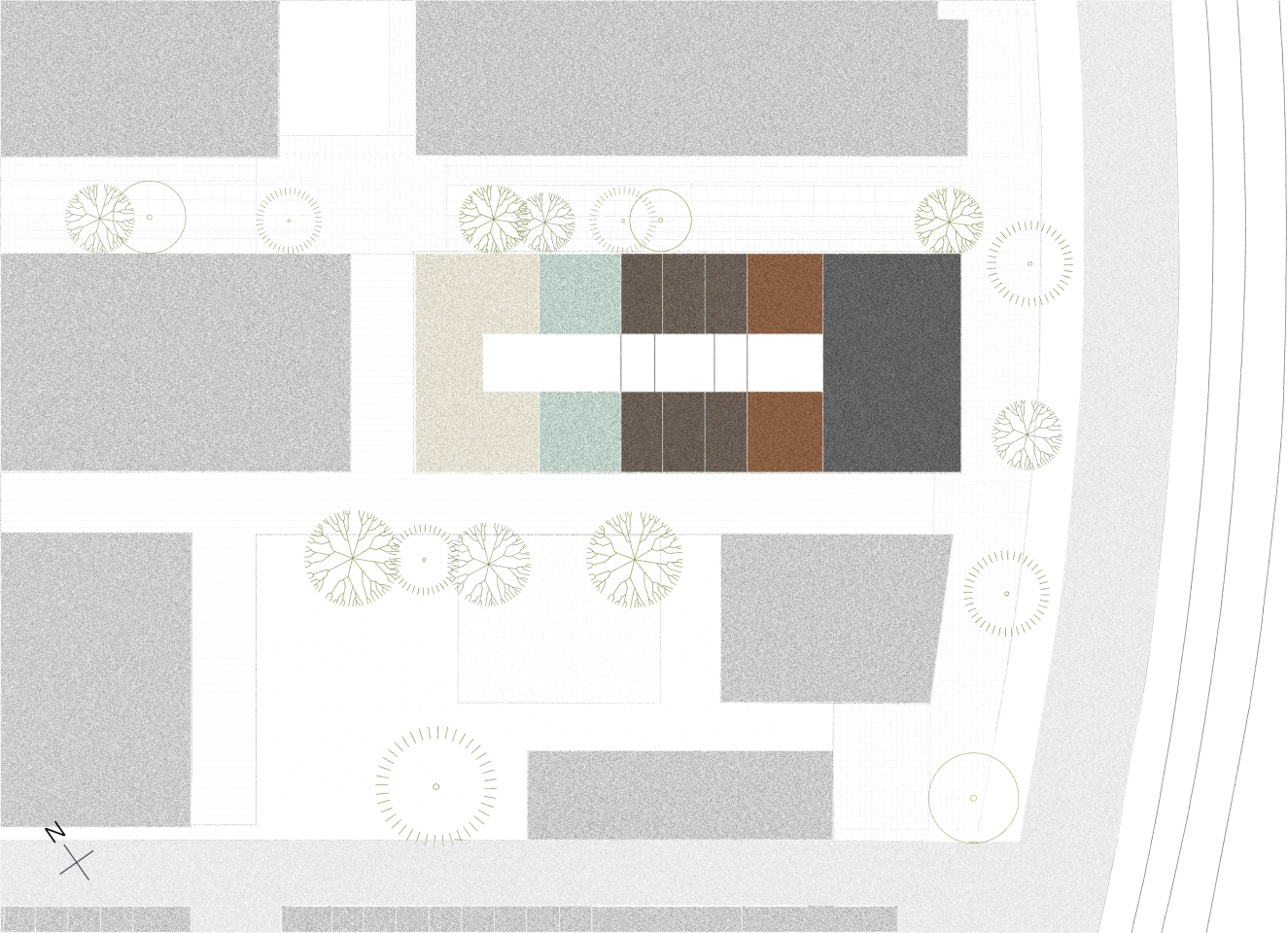 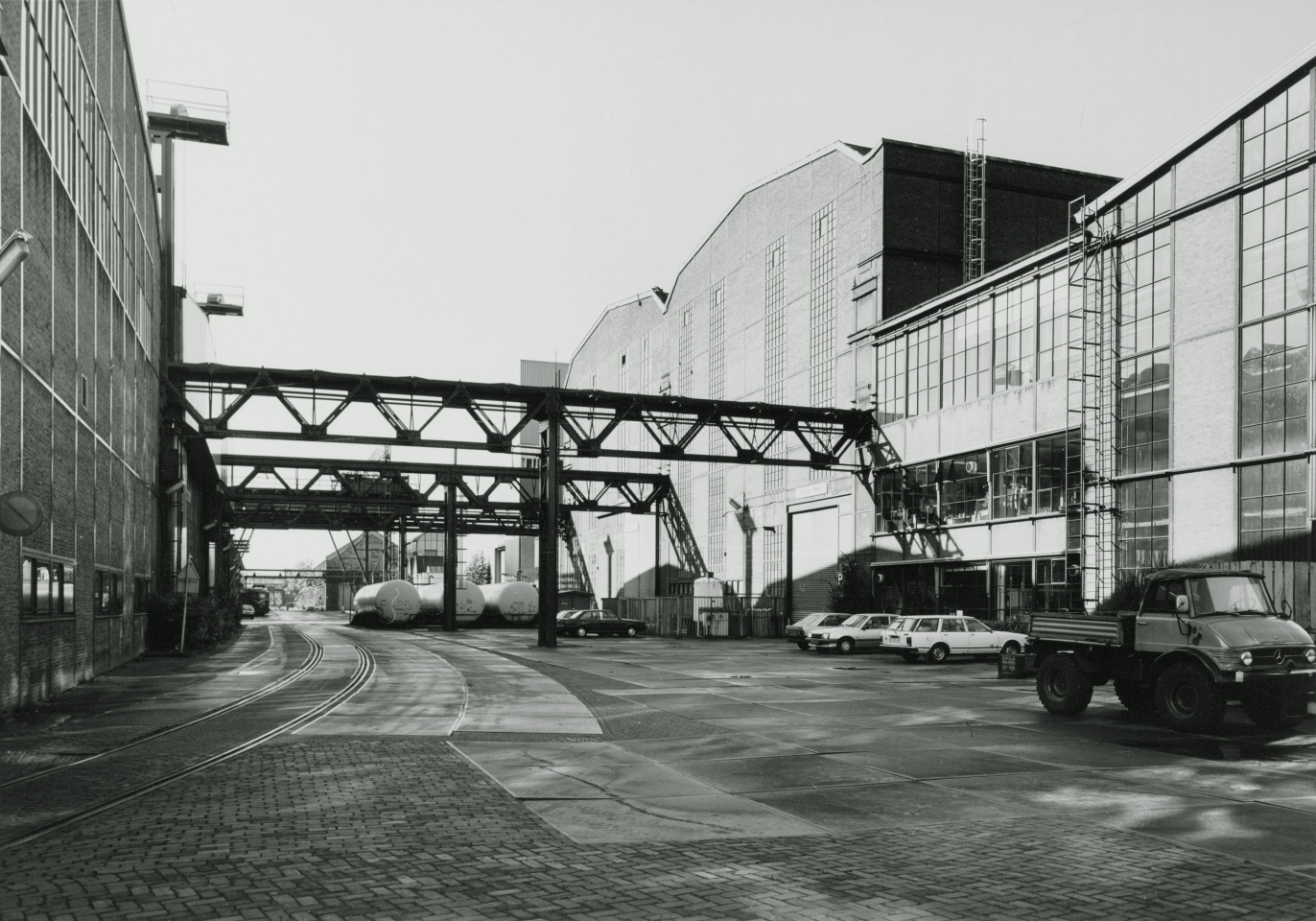 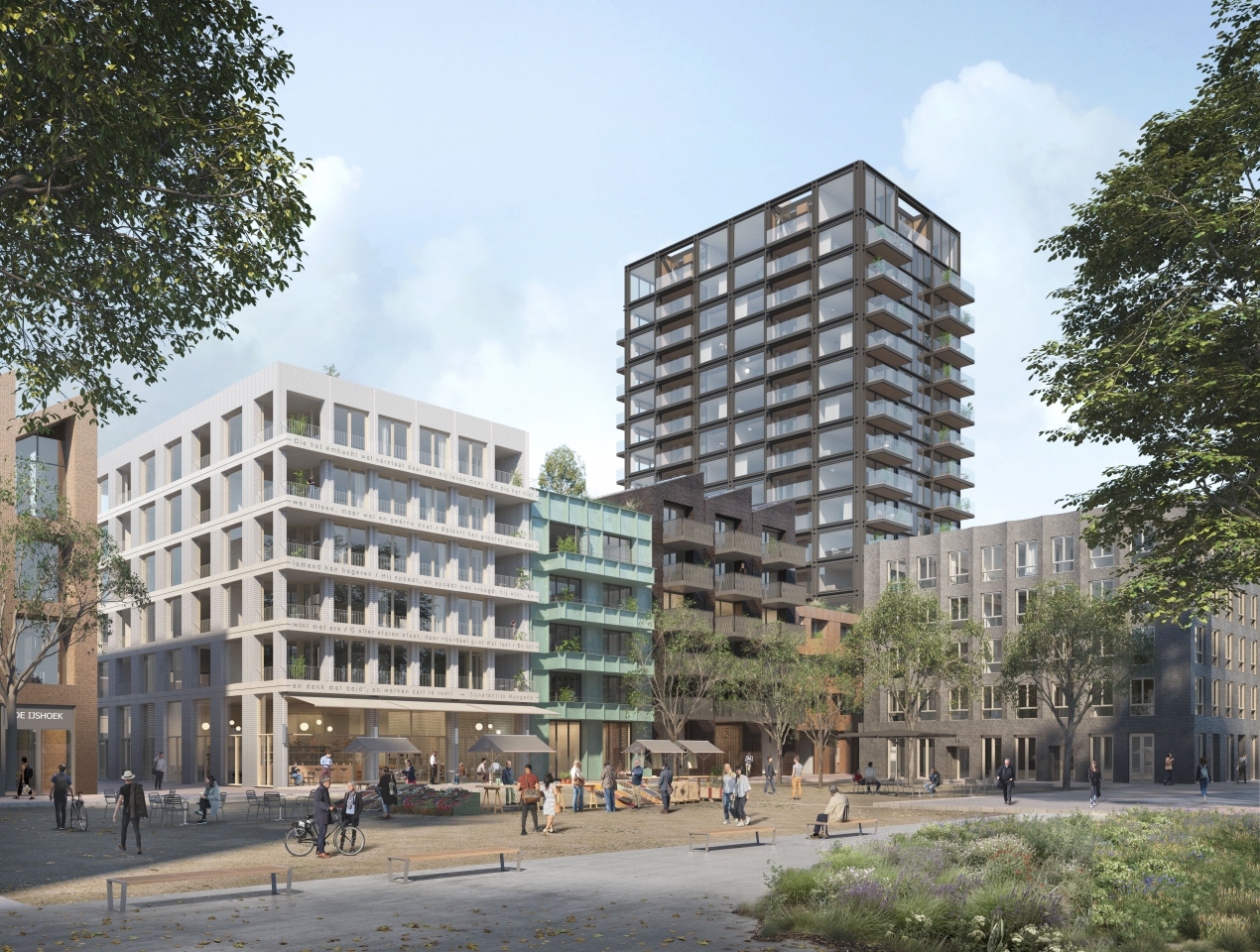 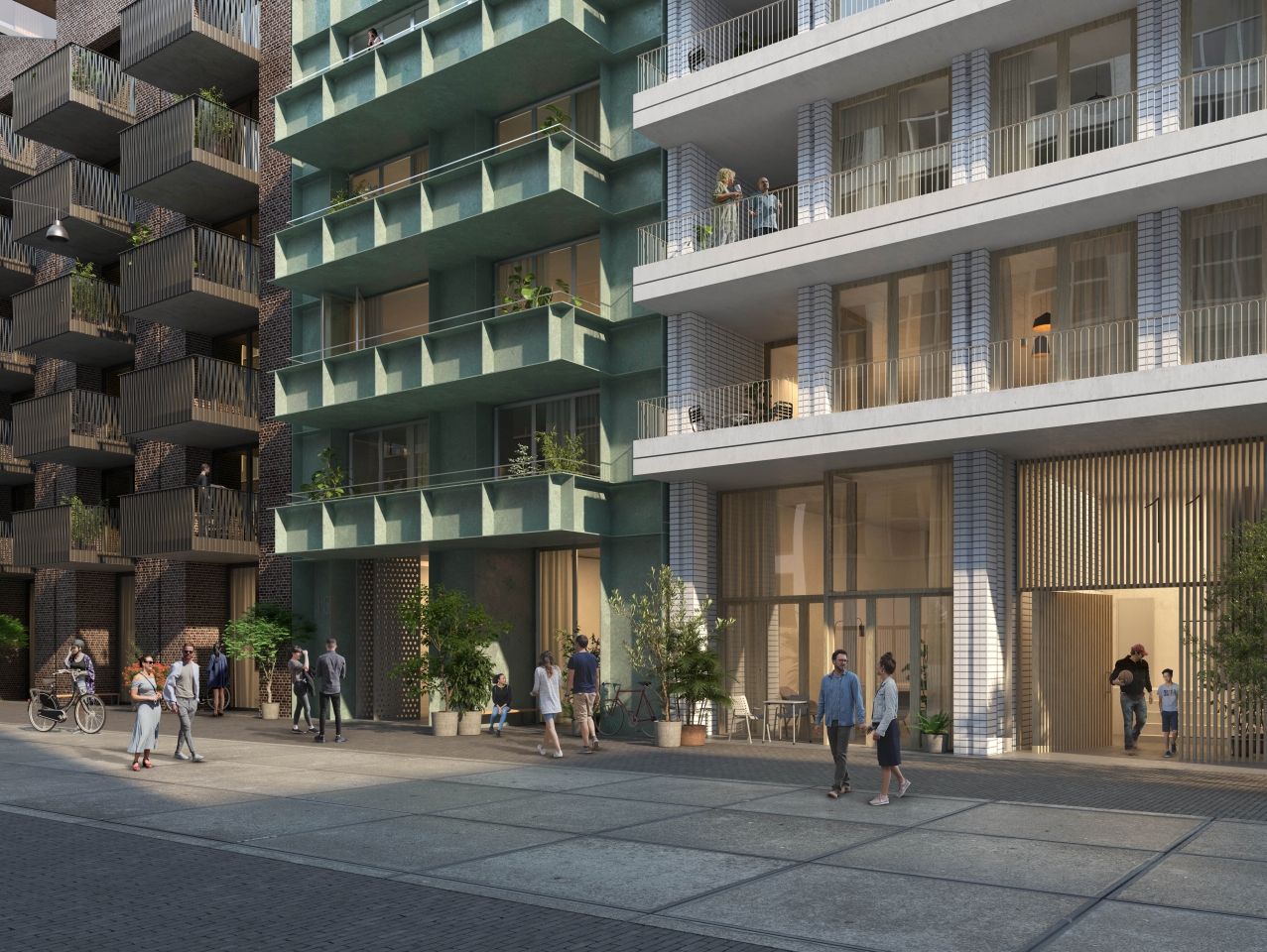 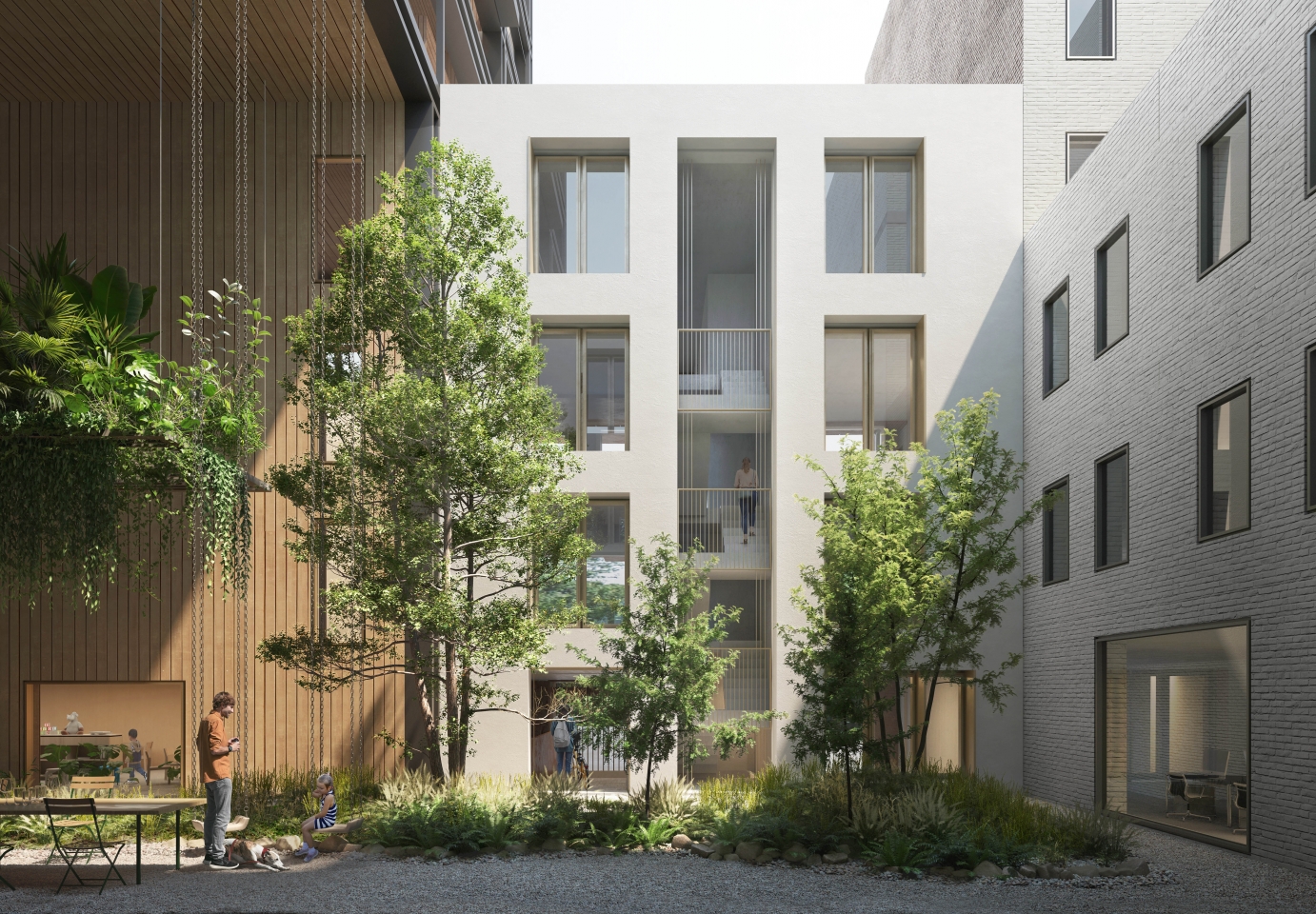 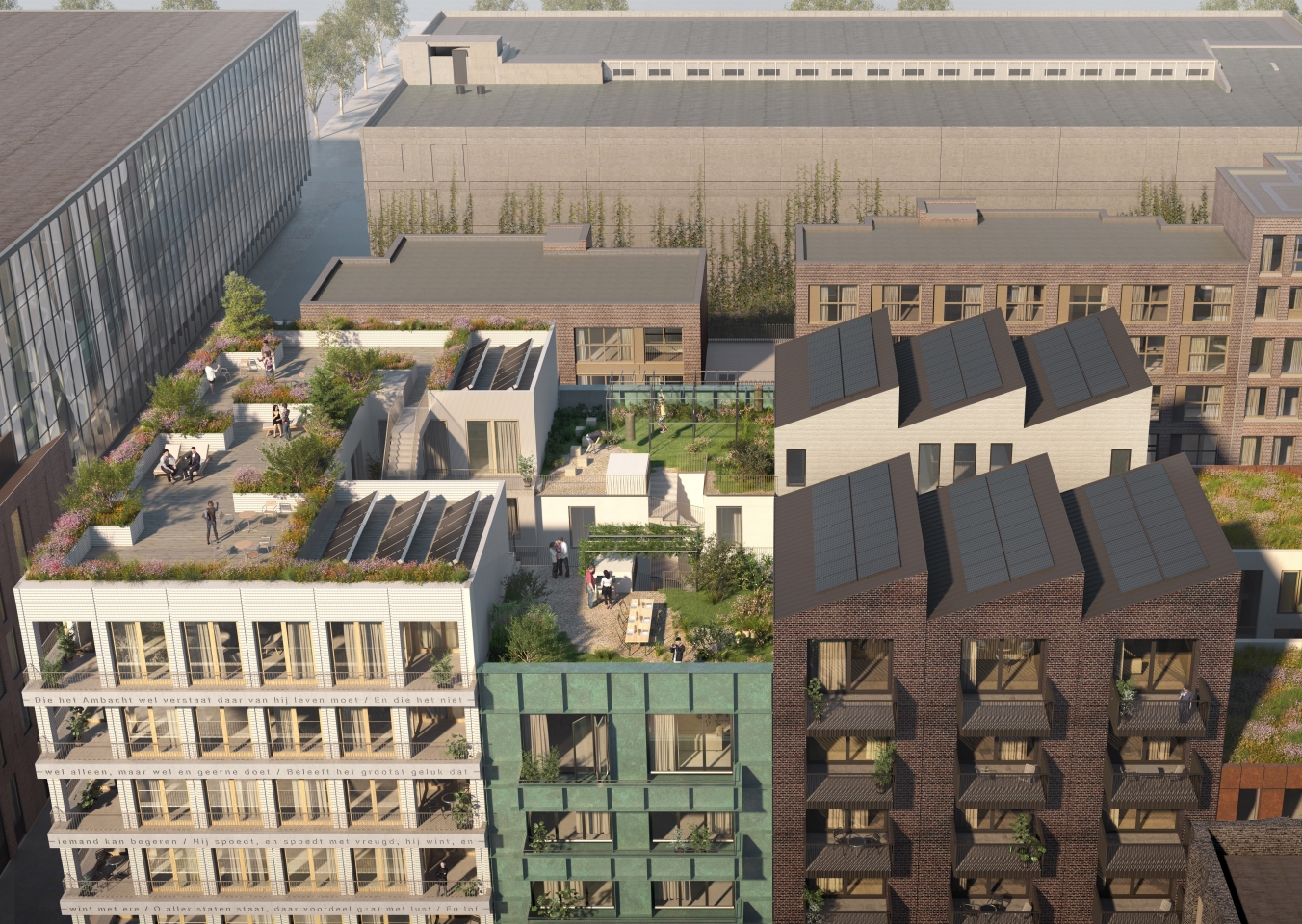 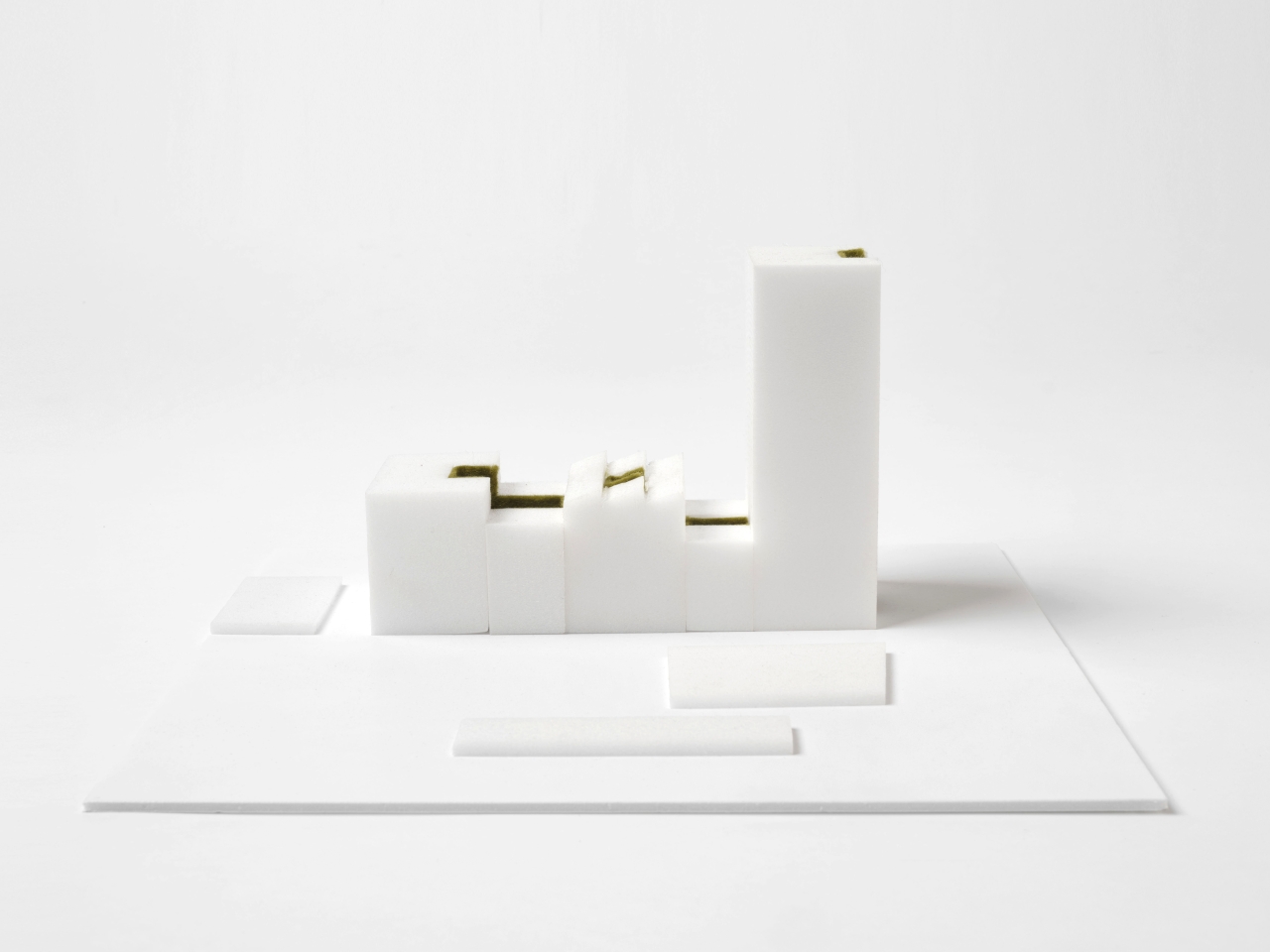 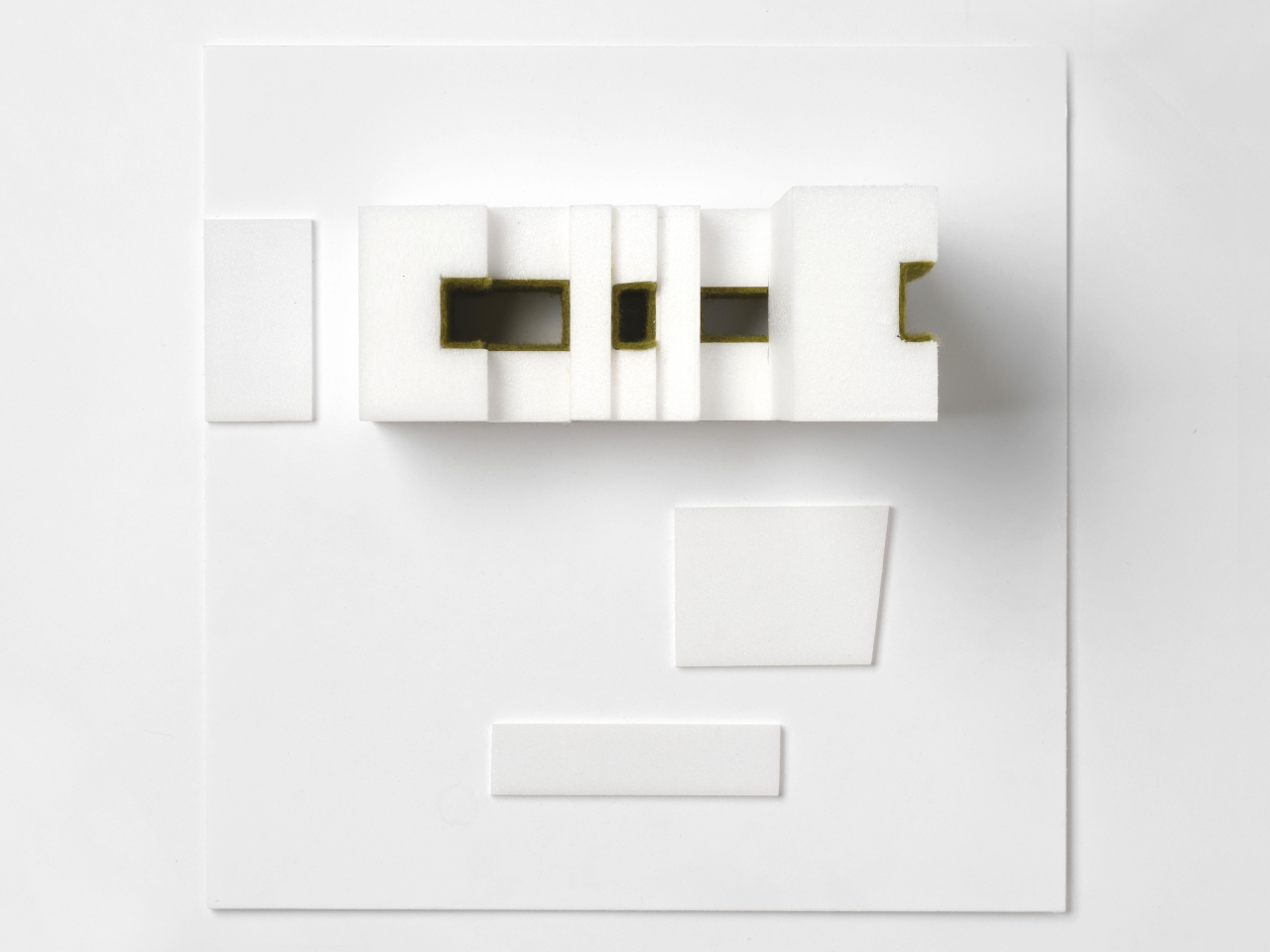 The island of Oostenburg was long a 'hidden' city enclave. Originally only connected to the rest of Amsterdam via the bridge over the Oostenburgerdwarsstraat, the island was used as the terrain for NV Nederlandsche Fabriek van Werktuigen en Spoorwegmaterieel [‘Dutch Factory For Tools and Railway Equipment’] – later called Werkspoor [‘Track work’]. The two massive halls, the Van Gendthallen and the Werkspoorhal, still exist here to evoke this past. Meanwhile, the nearby INIT building from 2005 serves as a collective office building for various companies and daily newspapers. Since 2018, the island has continued to develop as a new metropolitan 'building city' that combines living with working, the old with the new, and the (semi-)collective courtyards with fully public squares. In short, a lively urbanity merges together with the surrounding water – complete with urban gardens dotting the various blocks.

For Oostenburg lot 9, ML_A designed a superblock in collaboration with Paul de Ruiter Architects. It consists of five plots, each with a strong identity and typological elaboration. The resulting complex features four medium-high buildings of different heights and a tower working as a closing accent. The parcelling was an opportunity to create architectural nuances in terms of appearance and typology that establish a contrast between the sturdy no-nonsense exteriors, and the soft and green interiors. The buildings are 'strung together' by a series of compact green courtyards, designed by landscape architects Boom. Here, nature offers a more silent counterpoint to the otherwise rugged urban exteriors. The roofs of the blocks are arranged with roof gardens, sun terraces, bee garden, outdoor kitchen and a panorama deck on the tower. In terms of programming, a rich mix of urban housing typologies and commercial and social functions is provided – including a day-care, a neighbourhood activity centre, co-working spaces and a catering facility on the neighbourhood square.

The blocks are materialized with a complementary-toned mix of exposed concrete, wood, copper, brick, steel and aluminium. A rich, plastic and unambiguous facade grid, without ornamentation, contributes to the refined detailing. In general, the architecture builds on the area’s industrial past, with the buildings having a monolithic character and a sense of permanence. The use of colour is self-evident, varied and also based on industrial references. Each building has its own range of outdoor spaces in the form of spacious loggias or cantilevered balconies.

Building 9A is a light building with six floors and is positioned prominently on the neighbourhood square. It’s built in sturdy white extruded stone with grey-white concrete floor slabs that protrude at the ends to form spacious balconies. The facade frames and entrance gate are made of highly-reliable accoya wood, which also gives the building a sense of warmth. In the plinth, on the square, there is an almost five meters high catering space. The poem 'Lieve Arbeid' [‘Dear Work’] by 17th-century poet and composer Constantijn Huygens is included in the floor edges of the square as an ode to Oostenburg's industrial past.

Building 9B was designed as two smaller-scale 5-storey buildings. The facades consist of a grid of cassette panels in green pre-patinated copper. This gives a fresh colour accent to the Lot 9 ensemble. The facade grid is an unambiguous composition with a prominent cantilever on all floors to create outdoor space for both apartments. Aluminium fronts provide an ultimate relationship between inside and outside.

Building 9C is a 6-storey building extending over the entire length of the plot. It consists of three bays terminated with shed roofs. The facades are set up with dark-brown masonry stones. Deep-set aluminium casement doors provide access to long cantilevered balconies, which are finished with a finely detailed fencing. The plinth on the square is intended for commercial co-working spaces – which also work to  enliven the square.
_
The tender was won by a team under the leadership of Being Development & MVRDV.