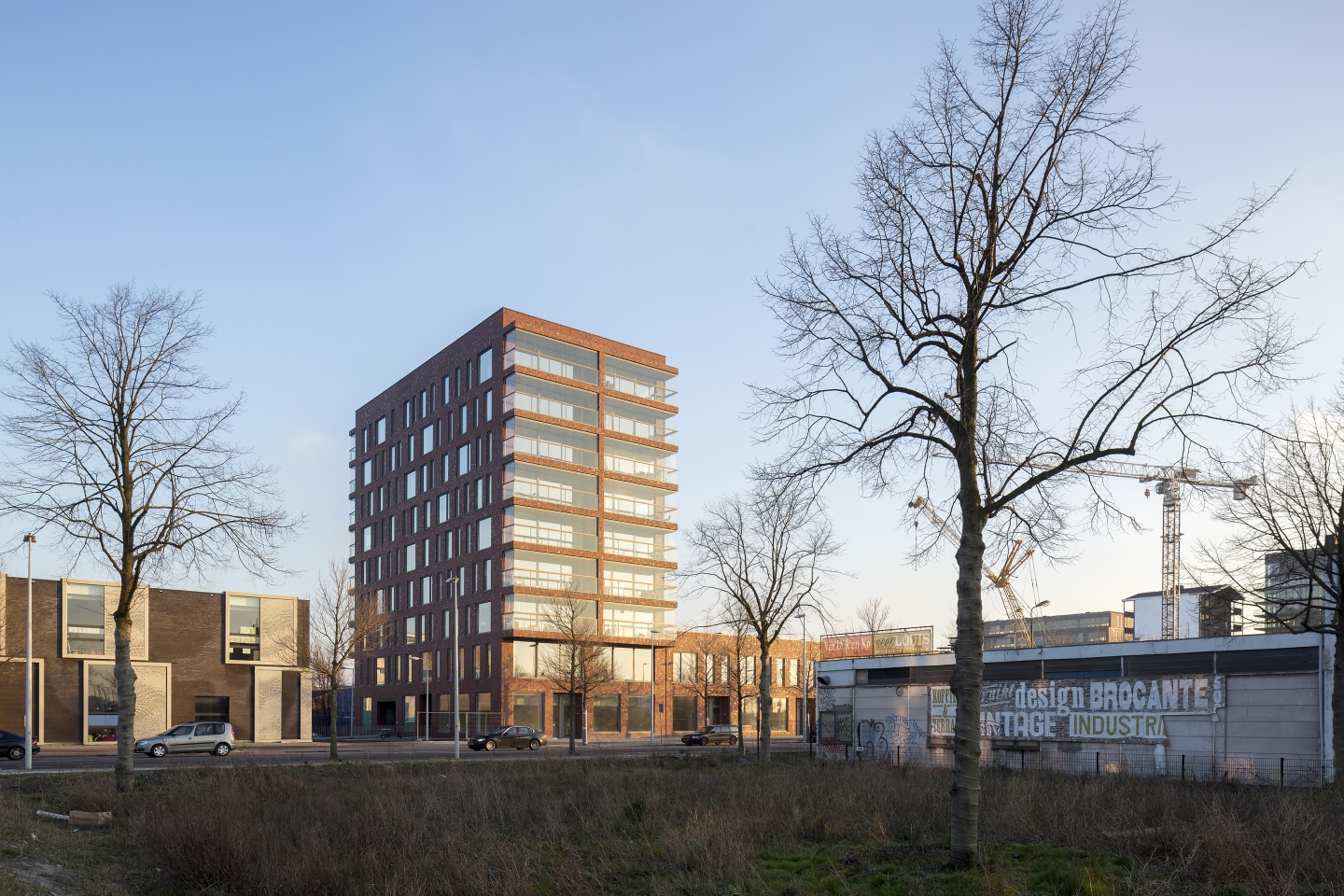 There are a number of striking details in this picture made by photographer Luuk Kramer for Marcel Lok_Architect (ML_A). It depicts an energy-neutral residential and commercial building in Buiksloterham in Amsterdam North as designed by ML_A. One such detail is how the photo not only captures the building in question, but also the immediate surroundings. Such a view deviates from typical architectural photography that tends to zoom in on a just-not-completed new building during pristine weather conditions. Here, however, the photographer and architect Marcel Lok, who himself selected the photo to represent this project, want to show that a meaningful relationship exists between the design and its environment. And here another detail catches your eye: an aged and faded advertising slogan on an adjacent building. The ad end is obviously torn off, while the first letters are obscured by a tree in the foreground. One can only read 'intage industr'.

Although this detail and the adjacent Docklands building by ML_A is only connected by pure coincidence, this seemingly meaningless phrase with two incomplete words does offer a fresh way to approach the working methods of this particular architecture office. To start with 'intage' where the initial letter 'v' has clearly been omitted. Vintage, read as tradition, is clearly aligned with Marcel Lok's attitude towards design. His work indeed shows a clear fascination with tradition in a variety of ways. Namely with its work, ML_A aims to do justice to the layered conditions and history of a specific place through the general pursuit of refined and high-quality detailing – without ever lapsing into cheap convenience or coquetry. ML_A is certainly not out to design another neo-style where traditional elements are copied and referenced in a scattershot manner. For the office, this relationship between new and old involves more precision, especially because it is more selective. The designs are often built up after an intensive investigation, and a resulting understanding, of the context. Tradition, whether architectural or urban, is then carefully fitted, mirrored or reinterpreted in the newly designed buildings and ensembles.

This approach is clearly reflected in the output of the office on many levels. One such example is Marcel Lok's contribution to the research and publication series 'Local Heroes', an initiative of Office Winhov. In his article about Arthur Staal, Lok mentions his fascination as a boy growing up, not yet bogged down with any architectural or historical knowledge, of the buildings by masters such Zanstra, Ingwersen and Staal. This fascination is the seed for his conviction that the city is a dynamic space that can always be activated further – where 'old' and 'new' buildings manifest themselves equally and jointly to colour the quality of the urban space. Since then, Marcel Lok believes in a dialogue with, and in, the city – one not paralysed by a 'fear' of losing some precious history (i.e., not vintage). The focus, on the other hand, is much more on an active and critical look at the relationships between old and new, between the historical and the contemporary. This dialogue is reflected in many elements of Lok’s work: not least in Lok’s involvement in the development of Amsterdam’s built environment as a member of the Spatial Quality Committee. Here too, he contributes to combining tradition and new design as meticulously as possible.

To keep the approach fresh, Marcel Lok and his team deal with tradition and historical context in various ways. Moreover, because the office always works selectively, this interplay is often unpredictable – in a pleasant way. For instance, elements or details are often consciously left out if they seem too much like the obvious choice. Hence, the word 'intage' perfectly depicts their selective approach to tradition and history. Intage in the hands of Marcel Lok leads to careful, contextual architecture with a sharp but also capricious reflection on the history of a place. Rather than being one-dimensional, the style is layered, selective and clearly interpretive.

The second word on the building in Buiksloterham is 'industr', with the original full word likely reading industry or perhaps industrial. Once again, a relationship with Lok’s work and method can be found here. While, the full word can partly reference the high-quality and modern technical finish of many of ML_A’s buildings, the partial word works to emphasize that the works usually deviate from any industry-derived idea of standardized production or repetition. In fact, ML_A consciously avoids any idea of industrial-scale production and its idea of endless repetition. The office honours the credo of limited production – without any sense that this relates to false modesty or capacity problems. It stems from Marcel Lok’s concern with guaranteeing that the utmost care and precision will go into each delivered project – call it customization. ‘Industr’ therefore stands for the opposite of serial multiples. It emphasizes much more the desire to make something that’s both high-quality and appropriate. This is the only way the office is willing and able to work. It’s an ambition that, especially in relation to the often feverish and hectic construction world, can only be achieved with complete dedication. It’s also resulted in an office with a modest staff size and the aim of working successively, rather than simultaneously, on projects. And yes, any resemblance to a workshop or studiolo, like those that were popular during the Italian Renaissance, is purely non-coincidental. ML_A regards – and cherishes – architectural work as a careful and painstaking study of design.

A good example of the results of such an approach is the Spaarndammerhart project. Here, ML_A together with KorthTielens, and with artist Martijn Sandberg and DS Landscape Architects, have added a valuable addition to the existing urban ensemble of the Spaarndammerbuurt. Inspired and not intimidated by the neighbourhood’s many world-famous examples of Amsterdam School architecture, the architects have succeeded in adding a fitting yet updated style interpretation to this already existing architectural wealth. The project can be clearly seen as a compilation of careful, well-considered choices – combined with craftsmanship. The result is not an indiscriminate copy of the Amsterdam School, but rather an idiosyncratic and often imaginative (re)interpretation. In short: with this project, the terms 'intage' and 'industr' come to life.

The term 'intage industr' as a signifier for the work and method of Marcel Lok and his team is striking in various ways. The office has its own distinctive way when it comes to relating to the context and building tradition – and does this while always striving for focussed and high-quality production. We see this attitude in the office’s finished works. And we will continue to see this gradually play out in all future efforts.